Providing Lifelines of Support for Those Onstage and Offstage

During a recent conversation in New York City’s Chelsea Market, Javier Muñoz and Krysta Rodriguez finished each other’s sentences. As accomplished actors who performed together in Broadway’s In the Heights, their closeness is not surprising.

But the sentences they finish have nothing to do with lines from a show or backstage stories. It’s when they talk about the side effects of prescription medicine or the isolation of being sick or simply the challenge of asking others for help.

In their separate journeys of living with HIV and cancer, Muñoz and Rodriguez find common ground in the good days and bad ones, the shared experiences in doctors’ offices and discussions with social workers. They both know firsthand how The Actors Fund shines as a beacon of light and hope for so many.

Muñoz, who stars as Alexander Hamilton in Broadway’s history-making hit Hamilton, first encountered the services of The Actors Fund in 2000 after being diagnosed with HIV.

“It was July 2 and I got my result that I tested positive,” Muñoz shared with Rodriguez. “I spent about two days in complete and utter depression, not sure what I even had available as far as options. I had no money to pay for medications, and I didn’t know how to even start.” 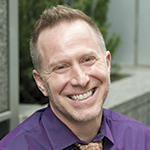 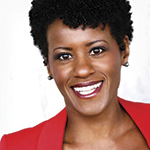 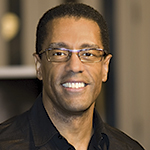 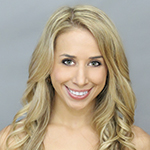 In the fall of 2014, Rodriguez, who’s appeared in seven Broadway shows including the recent revival of Spring Awakening, was diagnosed with breast cancer on the eve of her 30th birthday. Even for someone with a successful career, the reality that comes after diagnosis can be daunting.

“I’m chugging along paying for everything and all of the stuff was starting to add up,” Rodriguez said. “The surgeries were going to be tens of thousands of dollars. My biggest problem was that I didn’t have any money.”

Rodriguez knew about The Actors Fund and its HIV/AIDS Initiative, but not the extent of other services offered.

“I was very aware of The Actors Fund because I had been collecting for Broadway Cares for years, but I didn’t have AIDS or HIV, so I thought, ‘Well, that’s that,'” she said. Rodriguez’s manager, however, knew of The Actors Fund’s support of women’s health and connected her to the organization. After sharing her challenges with The Actors Fund, Rodriguez was amazed by the support she received.

“My social worker, Allison, came in and said, ‘We can have a check for you,'” Rodriguez remembered. “I started shaking, I started crying. I said, ‘Where does this money come from?’ And she was like, ‘You helped raise it. It came from you.'”

Rodriguez’s assistance came through the Phyllis Newman Women’s Health Initiative. In 1996, thanks in part to a $10,000 grant from Broadway Cares, The Actors Fund established the initiative to provide a safety net to women in the industry tailored to their unique needs and illnesses. These women-centric concerns include HIV/AIDS, breast, cervical and ovarian cancers, domestic violence, chemical dependency and mental health issues. Since that first grant, Broadway Cares has awarded $9.4 million to the women’s health initiative.

For both Rodriguez and Muñoz, The Actors Fund provided access to financial assistance, countless resources and a safe, understanding community.

Muñoz appreciated how The Actors Fund recognized the unique struggles of people in the entertainment industry and provided customized financial and emotional support based on those needs.

For Muñoz, his connection to treatment and support was provided by the HIV/AIDS Initiative. Established more than 25 years ago, the initiative offers support to performing arts professionals through financial assistance, counseling services, weekly support groups, access to vital medication and long-term holistic planning. In 2016, Broadway Cares awarded $2 million to the initiative.

“I felt so much comfort, so much safety,” Muñoz said. “For the first time I got help within my community.”

Today, Rodriguez’s cancer is in remission and Muñoz has learned how to manage his diagnosis. Neither depends on the kindness of The Actors Fund at the moment, but because the safety net provided by Broadway Cares played such a key role in their journeys to recovery, they are eager to give back.

During the run of Spring Awakening, Rodriguez shared her personal story as part of Broadway Cares’ fundraising appeal: “The money doesn’t go to a vault somewhere, it’s getting put back into the community. It’s me, it’s somebody next to me, it’s four people behind me, it’s somebody in the next show you’re going to see.”

Muñoz enjoys holding Broadway Cares’ iconic red donation bucket after shows because it gives him an opportunity to connect with fans in an inspiring way.

“It feels wonderful to say thank you to the person, to connect with the audience member,” Muñoz said. “Not only have they helped our industry, but some of the money they’re donating may be a resource for them later in life from some organization that they don’t even realize Broadway Cares/Equity Fights AIDS helps support. We’re asking for their help because here we are, living proof that it works.”

The HIV/AIDS Initiative works with men and women in the entertainment industry to create confidential, holistic plans and support systems that will meet each person’s emotional, medical and financial needs. The HIV/AIDS Initiative facilitates support not just for those living with HIV/AIDS, but also for their caregivers and partners who are HIV-negative.

Broadway Cares/Equity Fights AIDS provided $2 million in support for the HIV/AIDS Initiative in 2016.

The Phyllis Newman Women’s Health Initiative, created in 1996 with a grant from Broadway Cares, is staffed by social workers experienced in helping women manage a range of critical health concerns.

The initiative’s dedicated resources address needs specific to women, including breast, cervical and ovarian cancers, domestic violence, chemical dependency and mental health issues. The goal is to help women receive the care and support they need to reduce stress and focus on their wellness.

The fund’s Artists Health Insurance Resource Center was started in 1998 with the singular mission to insure every artist in the United States.  Now that that goal is closer to reality, AHIRC is positioned to help the industry understand the Affordable Care Act, its opportunities and its implications.

With in-person counseling in New York and Los Angeles, national telephone support and workshops throughout the country, AHIRC continues to work to reduce the number of uninsured artists and expand access to quality, affordable health care.

The Al Hirschfeld Free Health Clinic addresses the immediate needs of those in the entertainment industry who are uninsured or underinsured. Located in New York City, the clinic provides urgent, primary and specialty care and patient education.

A comprehensive employment and training program, the Actors Fund Work Program helps entertainment professionals identify and find sideline work and new careers in industries where their skills and experience are also valued.

By highlighting the skills of entertainment industry professionals – such as communication, discipline, creativity, flexibility and professionalism – the Actors Fund Work Program has helped clients begin careers in many other industries, including teaching, administrative support, healing professions and real estate.

Launched in 2007 with a grant from Broadway Cares, The Dancers’ Resource provides support, education and information through one-on-one counseling in New York City and telephone and email support to those across the country.

Through a dedicated social worker, the program also offers groups for dancers dealing with injuries or other health concerns. Through these groups, dancers can safely and confidentially address the emotional issues and other complexities that are specific to dancers facing physical problems. The program also addresses mental health issues, eating disorders, substance abuse and depression.

Broadway Cares/Equity Fights AIDS provided $310,000 in support for The Dancers’ Resource in 2016.

The Stage Managers’ National Health Directory offers a web-based directory providing Broadway and national touring companies with a list of doctors and health professionals in 30 cities across the country. The Actors Fund as a single reliable source of doctors and specialists who can be called when cast members, crew and staff need medical care assembled the directory. The practitioners included were recommended by theatres, stage managers, actors and others in the entertainment industry.

Broadway Cares/Equity Fights AIDS provided $200,000 in support for the Stage Managers’ Project in 2016. 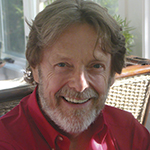 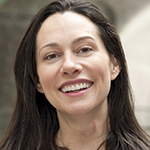 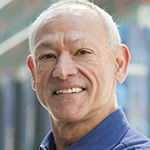 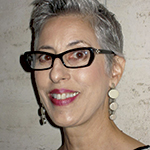 Support for The Actors’ Fund by Fiscal Year 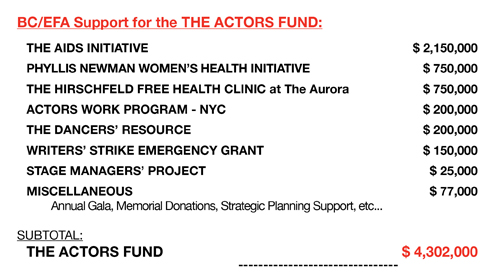