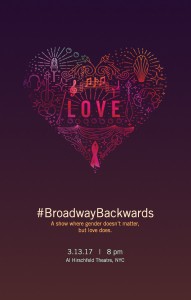 The Broadway community will come together once again for Broadway Backwards, an annual celebration of unity, equality and love through gender-reversed performances of classic showtunes.

The star-studded event features performances of quintessential Broadway tunes with a twist: men sing songs originally intended for women, and vice versa. Artists will perform the great songs of musical theatre while freeing themselves of the bounds of gender norms. It&squos a show where gender doesn&squot matter, but love does.

VIP tickets include premium seats and a special post-show cocktail reception with the cast. A limited number of &dquoBackstage & Beyond&dquo ticket packages also are available, which include the opportunity to see the dress rehearsal, exclusive backstage access, a meet-and-greet with some of the stars of Broadway Backwards, premium seats for the show and more.

This year’s special guest performers will be announced in the coming weeks. Creator Robert Bartley will return to direct the show. He will be joined by Mary-Mitchell Campbell as music supervisor and Laura Bergquist as music director. Choreography will be created by Bartley, Christopher Rice and Adam Roberts.

Last year&squos inspiring performance raised a record $480,287. It featured a 67-person cast of Broadway and television&squos best, backed by a live onstage orchestra.

What began as a small, grassroots concert performed at The Center in 2006 quickly grew into a highly-anticipated event presented in Broadway&squos best theatres. In its 11 editions, Broadway Backwards has raised more than $2.8 million for Broadway Cares and The Center.

Watch photos from and read about last year’s Broadway Backwards.